Sparring is the physical application of attack and defence techniques gained from pattern and fundamental exercise against an actual moving opponent or opponents under various situations. It is. therefore, not only inseparable from pattern and fundamental movement but also indispensable to promote the fighting spirit and courage, to train the eyes, to read the opponent's tactic and manoeuvers, to forge the attacking and blocking tools, to test his or her own skills and ability and to learn other movements hardly to be gained from pattern or fundamental exercise.

Although Taekwon-Do is a defensive art, training by the practical application of techniques against a real adversary, or several, is very important. In fact, it is an excellent way to check what a student has learned. Sparring is indispensable for the student who wants to progress. During sparring, he or she will test skills acquired, learn to recognize and, with practice, anticipate the opponent tactics; sparring builds self-control, self-confidence, and courage. There are two types of sparring: step sparring and free sparring.

1. Step Sparring: Step (or prearranged) sparring is planned by the players. They agree on the rules, such as the number of steps to be taken, the target to be attacked, the tool to be used, etc. There is no contact; the purpose is to develop control by stopping just short of the target. There are three levels of step sparring: 3-step for beginners, 2-step or intermediate, and 1-step or advanced. The goal is to help the student understand the purpose of the movements, to master interaction with the opponent regarding stances and distances, to develop faster reflexes and instantaneous response in self-defense. 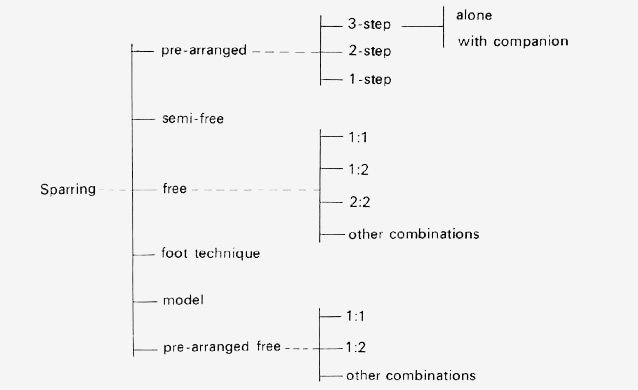 2. Free Sparring: Free sparring is not pre-arranged. There is no prescribed number of steps or movements. It is essentially open combat with controlled attacks using all available means and methods. In order to prevent injury, protective equipment is worn. The teaching of free sparing is in the program starting at the yellow belt level. According to the rules, the attacker must stop the attacking tool just before reaching certain vital spots. Only blows that stop two centimeters from a vital spot are counted. The evaluation of free sparring is based on accuracy, speed, timing, distance, and quality of technique executed. Balance, blocking and dodging skills, and attitude are also very important. Because each of the participants is free to move and attack, free sparring encourages the development of strategies for attack and defense, while improving speed and timing. Since free sparring is practiced as a non-stop fight that may consist of one, two or three rounds, being in top physical condition is very important.

Patterns are various fundamental movements, most of which represent either attack or defense techniques, set to a fixed and logical sequence.

Destruction is part of the Taekwon-Do syllabus for promotion of adult students to their next grade level.

These techniques are not only the most interesting in Taekwon Do but also the most advanced. They are, in every sense, for practical self-defense.